They were winning the Olympic quota spot and finishing in the top two, which Rudrankksh Balasaheb Patil already assured. It was a special day in Cairo at the ISSF World Championship Rifle/Pistol for India. But the teenager-created sensation by becoming the world champion and thrillingly added icing to the cake.

Rudrankksh Balasaheb Patil had put up posters in his room in Thane; the ‘Paris 2024’ signs printed in bold letters remind the 18-year-old air rifle shooter of his dream of winning a medal at the Olympics. One of the posters is at eye level for Rudrankksh to see when he enters his room He told me he pasted it up because he wanted ‘Paris 2024’ to be the last thing he sees when he looks up before he goes to sleep and when he wakes up the first thing he sees is the poster says his father SP Police Palghar Balasaheb Patil.

While the Olympic quota belongs to the country, Patil’s gold medal is his. India has won Gold Medals, Titles, World Cups and even World Championships in various categories, which comes every four years as this is the first for India In 10mcategory in World Championships since Abhinav Bindra won his in 2006. It also marks him as a rifle shooter to watch out for; beginning in 2006, winners of the 10m air rifle event at the World Championships have gone on to medal at the subsequent Olympic games.

Rudrankksh’s gold certainly didn’t come easy. Patil topped qualification with 633.9. He didn’t have a single shot under10.1.in the Gold Medal Match, in 11 of the 15 shots, Patil scored 10.5 or Higher -an incredibly high standard. There can be no caveats to his performance. This was a stacked field in Cairo (Except for Russia’s Vladimir Maslennikov, each of the finalists from the Tokyo 2020 Games was participating). “All these shooters are those Rudrankksh has idolised,” says Balasaheb Patil.

“He is a massive fan of (China’s) Yang Haoran and (Hungary’s) Istvan Peni. Even in the past, he would keep talking about them; He would discuss how they train, how they stand, and how they behave during competition. He used to watch videos of them. He admires their style. He likes observing how they play. He reads everything about them. He was excited to compete with them at Cairo,” says Balasaheb. While Rudrankksh might once have been poring over his competitor’s biographies, a few will likely do the same for him now.

Rudrankkah Patil started his shooting career six years ago when Balasaheb, a deputy commissioner of police, was invited to inaugurate a shooting range in Thane, where he began to train with Snehal Papalkar when he was thirteen. He was dreaming only about shooting and was teaching at Balasaheb shooting range in Vile Parle. At that time, he spent nearly 8 hours a day in travel and practice. At that time, he felt unfortunate that he didn’t have friends like other kids. And I motivated him to say, “Everyone will one day tell you were a classmate, Said Balasaheb Patil.

In 2021 Rudrankksh won a silver medal at the Junior World Championship and followed that up with a gold medal at the ISSF World Cup in Suhl earlier this year. But Rudrankksh’s father was saying that he was looking for a senior level and was only 17 years old at the time of the Olympics, where he did not qualify and was disappointed and took some time to recover from it and finally reasoned for not training, He felt even if he had gone to the Olympics; he didn’t have the experience to compete and win a medal,” he says. Rudraksha has been slowly building himself up for the senior stage. He took part in two World Cups this year, reaching the final at the one in Cairo. A week ago, he emphasised his position as the best in India by winning gold at the National Games in Ahmedabad. Now he’s cemented that claim with the World Championship medal and the Olympic quota.

Hemangini Patil said I feel honoured to be the mother of the world champion. As a companion of his journey, my mind is very clear about his fantabulous win because his nature and attitude are the base of his achievements. He is very calm, relaxed and a perfectionist in every aspect of life. He will only give up any task if he finishes it with the highest potential. She further said her father, Balasaheb knows his son will be happy and will likely celebrate the win. “He is a bit of a foodie. Whenever he travels abroad, he makes it a point to try something from the place. He’ll probably have a good meal after this win. He loves his chicken and his pasta,” he says.

But while he might allow a bit of revelry in Cairo, Balasaheb knows that his son is already preparing for the next challenge. “The Olympic medal has always been his goal. He told me during the Olympics that if he goes to Paris, he will be so well prepared that he will win a medal. That’s his mentality; even now that he’s won a quota, he’s only going to be thinking about that medal,” says Balasaheb. Patil SP Police Palghar

This Story Is Released By Satish Reddy From https://worldnewsnetwork.co.in/

If you have any objection to this press release content, kindly contact pr.error.rectification[at]gmail.com to notify us. We will respond and rectify the situation in the next 24 hours. 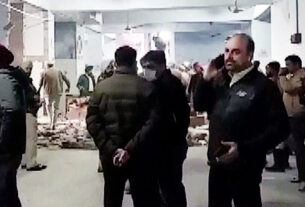 The Much-Awaited Annual Garden Sale by Shades of India is back!

The Much-Awaited Annual Garden Sale by Shades of India is back!

Women’s Wear by Shades of India Mark your calendars from 7th – 9th December 2022 India, December 05: Fashion shoppers will confirm that there is no sweeter tune than when their favourite brands go on sale!  Shades of India- the premium lifestyle brand by Mandeep Nagi and David Husego in 2007, presents its annual “Garden Sale” […]

Avatar 2 release date, cast, trailer and all you need to know about The Way of Water

December 05: It’s been over a decade since the release of the first Avatar movie, and fans are finally getting what they’ve been waiting for—Avatar 2 is set to be released in December 2022. While there’s still some time to wait, that doesn’t mean you can’t start getting ready to watch Avatar 2 online as […]

How will the extension of Kantharaj URS Road in Mysuru, benefit the surrounding areas?